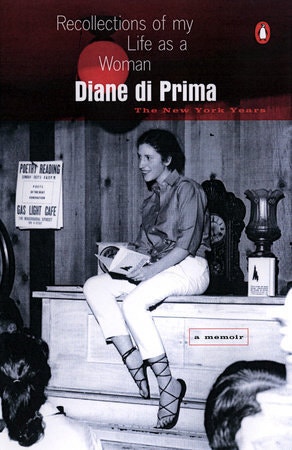 A NY Times Book section obituary Diane di Prima, Poet of the Beat Era and Beyond, Dies at 86  and an Associated Press obituary were published today, 10/28/2020.
From the New York Times:

Ms. di Prima often spoke of the influence of her maternal grandfather, Domenico Mallozzi, a tailor and ardent anarchist who had immigrated from Italy. He was, she wrote in her 2001 memoir, “regarded somewhat as a family treasure: a powerful and erratic kind of lightning generator, a kind of Tesla experiment, we for some reason kept in the house.”

Her collection “Revolutionary Letters” (she wrote a series of poems under that title) included a poem about him, “April Fool Birthday Poem for Grandpa,” that began this way:

Today is your
birthday and I have tried
writing these things before,
but now
in the gathering madness, I want to
thank you
for telling me what to expect
for pulling
no punches, back there in that scrubbed Bronx parlor

Yet, she wrote, her maternal grandmother, Antoinette, and the other women in the household where she grew up taught her the practicalities of survival. “It was at my grandmother’s side,” she wrote, “in that scrubbed and waxed apartment, that I received my first communications about the specialness and the relative uselessness of men.”

One of Ms. di Prima’s best-loved poems, written in 1957 for her first child, Jeanne, is called “Song for Baby-o, Unborn”:

Sweetheart,
when you break thru
you’ll find
a poet here
not quite what one would choose.
I won’t promise
you’ll never go hungry
or that you won’t be sad
on this gutted
breaking
globe
but I can show you
baby
enough to love
to break your heart
forever.